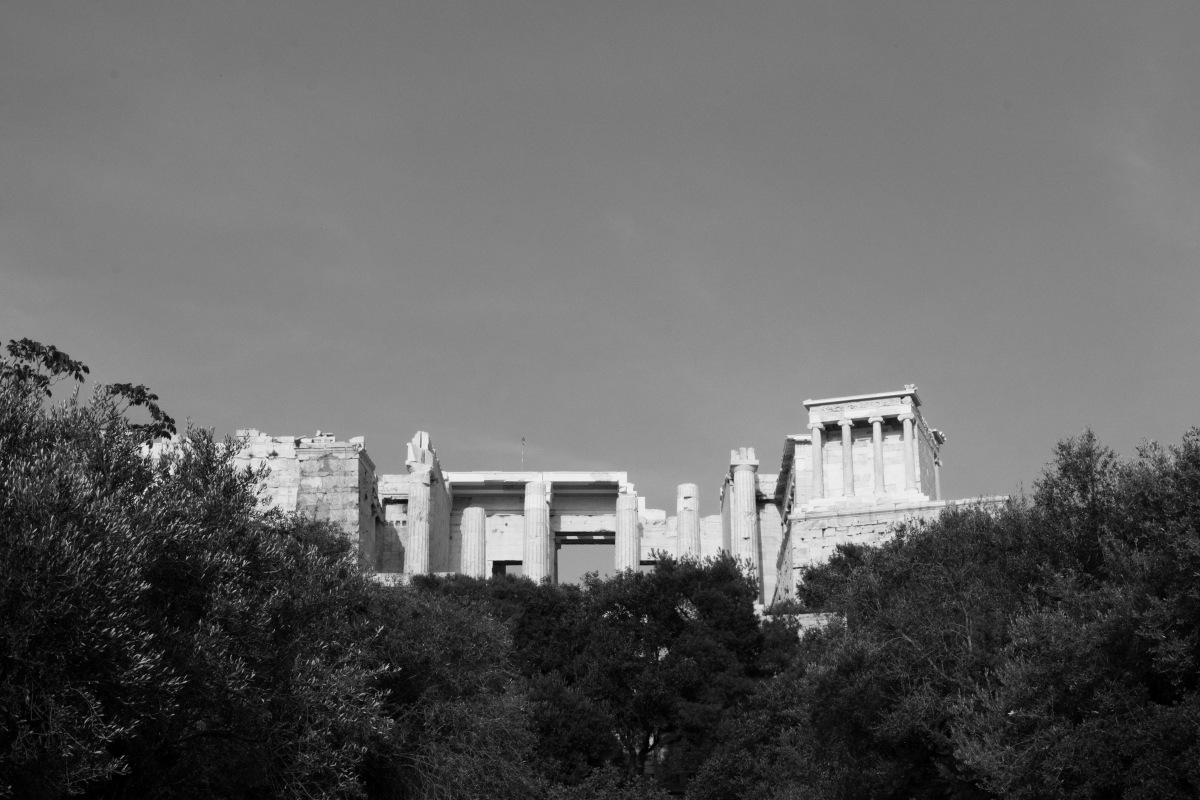 Well, I think I have recovered enough from my vacation to finally start writing about it 🙂  Since I am a teacher and due with baby #2 in June, spring break seemed like the perfect time to take our last big trip before baby’s arrival.  We had originally hoped to head to Santorini, Greece for a few days with some friends of ours, but they ended up not being able to join us, so we extended our plans a bit and made a whole week of it.  B had won a trip to Paris through a travel agency through his work, and the plans had fallen through multiple times due to various problems.  We finally just asked them if we could spend the money on a trip of our choosing, to which they agreed.  So we used the money through them to book all of our accommodations for this trip, which covered a hotel in Athens for one night, accommodations in Santorini, Greece for four nights, and a hotel in Bucharest, Romania for two nights.

{Yes, we are the crazy family who booked 7 nights/8 days of excitement while almost 8 months pregnant and lugging around an 18-month-old 🙂  This is what the travelbug does to you!}

Our trip certainly was full of excitement, starting from the very beginning!  Our initial flight from London Stansted to Athens was Saturday, April 9 at 9:05am.  There had been some strikes and issues with certain flights/airlines (as well as Greek ferries, which we were to use Sunday) throughout the week, so we were constantly checking and double-checking the status of our flights and ferry up until that day.  Luckily, none of the strikes affected us.  We planned to leave the house around 5:30 to give us plenty of time to get there and checked in.  I’m glad we planned for the extra time, as my car decided not to start that morning…  We ended up having to take B’s (much older) car, causing us to have to switch the car seat and move all the bags and such.  Not a huge deal, but definitely not how we wanted to start our vacation!  So we got on the road and realized two things: a. I had booked meet and greet parking (different than the one I used for my Sweden trip) using my car and registration, and b. we had left our Ergo baby carrier in my car, where we kept it most of the time.  I called up the meet and greet service to see if we could alter the reservation using B’s car, which was no problem.  I know I said before that I wasn’t overly impressed with meet and greet, but since we had bigger bags, were staying longer, and had Benjamin with us, we decided to try it again– I was happy we did!  I think it definitely saved us some time and hassle for this trip.  Our second problem, the left-behind Ergo, was definitely much more of a hinderance than the car situation, which we would realize quite often throughout our trip.

Anyway, we got to the airport, got through security quickly (thank you giant baby bump), and had enough time to grab a coffee before we headed to our gate.  The flight was probably the longest we’ve had here in Europe (3+ hours), and we did not buy Benjamin his own seat, as he was still young enough to be a lap child.  While he wasn’t a terror during the flight, if I had to do it over again, I would purchase him his own seat–he is just getting too big and mobile, and my 8-month-pregnant belly didn’t help.  We made it through the flight with the help of snacks, some new books and toys, and episodes of Yo Gabba Gabba on daddy’s iPad.

We arrived in Athens mid-afternoon, and decided to catch a taxi to our hotel.  Apparently we ventured to the wrong taxi area, for as soon as we loaded our stuff and climbed in the cab, a police officer stopped us and our taxi driver, explaining to us that it was not an approved area for cabs.  He took our information then directed us to the *correct* cab area.  In case anyone is catching a cab from the Athens airport anytime soon, when you exit the airport, the *correct* cab area is to the left 🙂

The travel agency that booked our hotel booked us one in Piraeus, which is the port city by Athens.  Our hotel was decent, nothing glamorous and over-the-top, but definitely not a dump either.  Since we were leaving early the next morning via ferry, the location was convenient for catching a quick cab to the port.  We were starving, as we had really only snacked all day in the airport and on the plane, so we dropped our bags and headed out to find something to eat.  There was a Greek restaurant just around the corner from the hotel that was fairly busy, so we gave it a shot.  It was really yummy–we had potatoes with herbs and cheese and we each had a wrap.

View from our hotel room and orange trees growing along the streets:

Since we were leaving early the following morning for Santorini, we knew we only had a small chunk of time to explore Athens.  B had been to Athens before, so he didn’t have anything specific in mind, but I really wanted to see the Acropolis/Parthenon.  We caught a cab back into Athens city, and headed directly for the Acropolis.  We stumbled across Poseidon on our way 😉 : 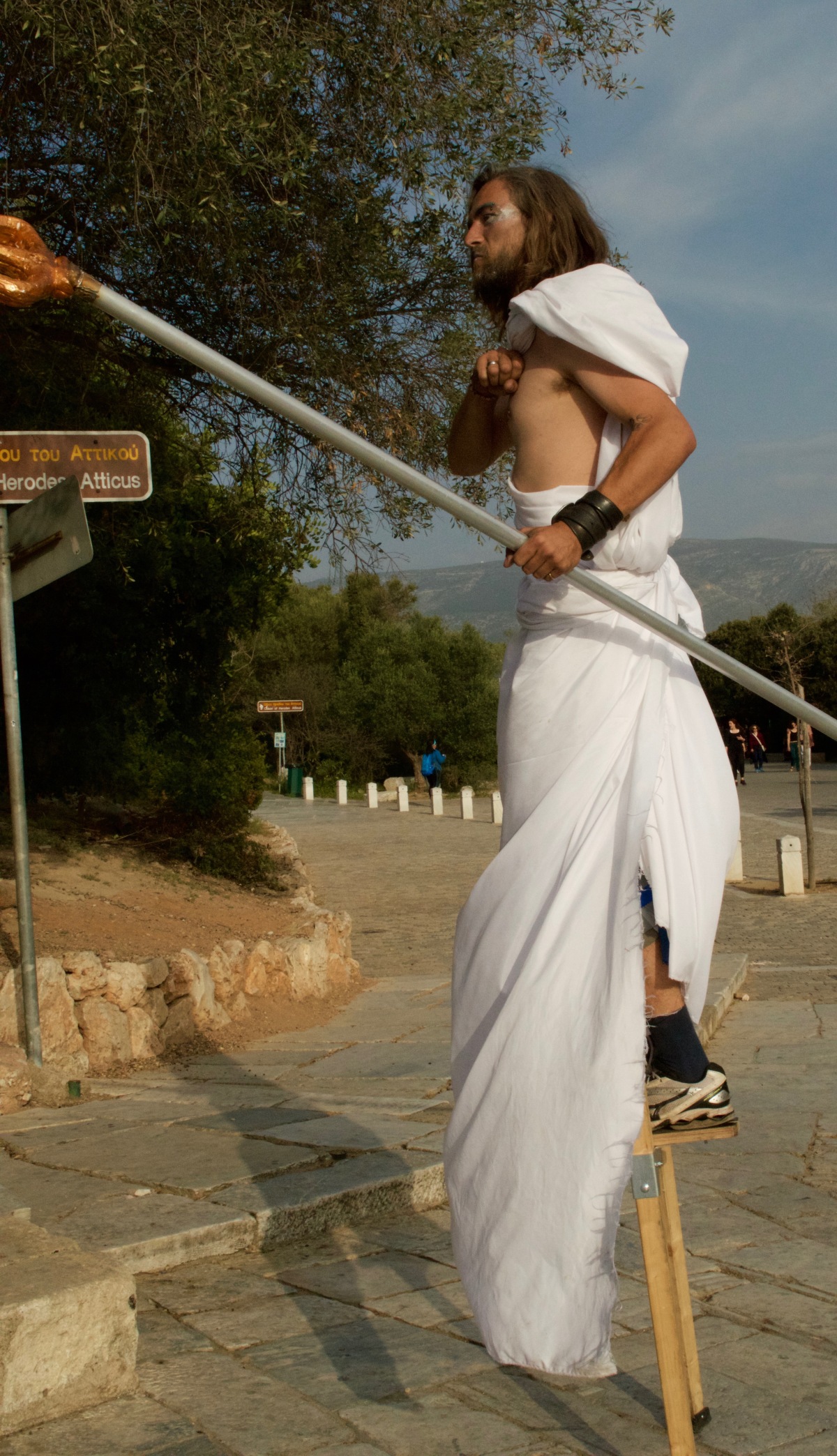 and Benjamin found a kitty who was not at all interested in him:

This was the first point in our trip that we realized we really needed the Ergo carrier.  The Acropolis is situated up on a rocky plateau-type area overlooking the city of Athens.  It is relatively high up and there are quite a bit of stairs leading there.  Strollers are not permitted, so we had to check it into the stroller-check area.  Lucky for us, that same place rented carriers FOR FREE (with an ID), so we got Benjamin situated in a hiking carrier to make the trek. 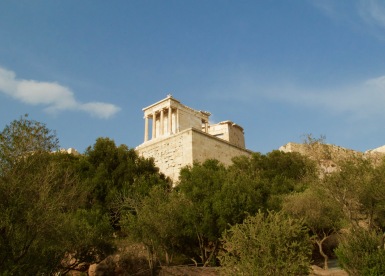 The first sight along our way was the Odeon of Herodes Atticus.  It’s so fascinating to see such old, beautiful structures!  I am not super into Greek history, but it’s definitely breathtaking and mind-blowing to see these ancient and incredible sights! 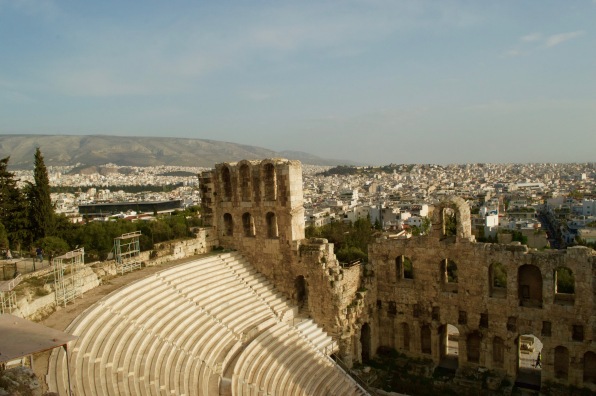 We continued up to where the Parthenon was located (along with several other structures), which gave us the most incredible views of Athens.  There was so much to take in, I could’ve stayed there taking photos for hours!  Here are a few highlights: 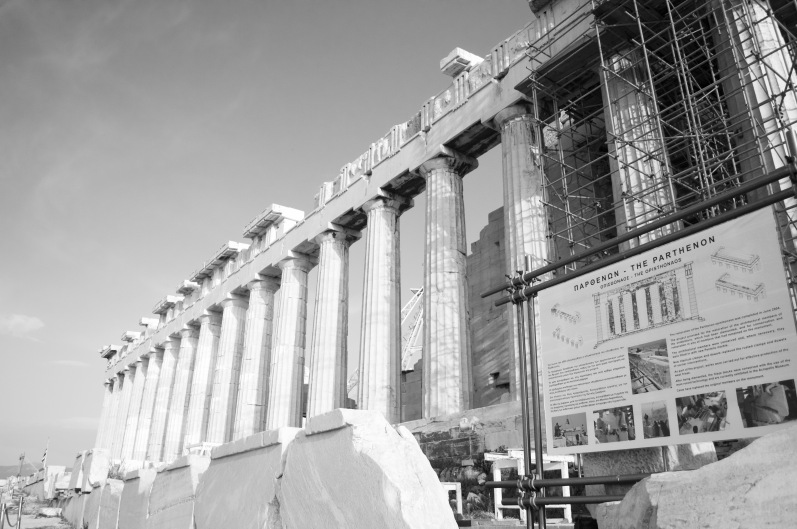 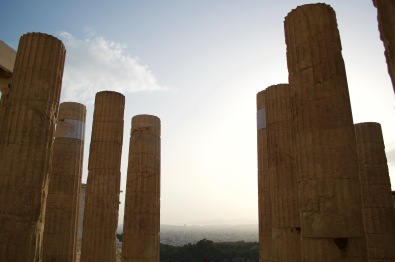 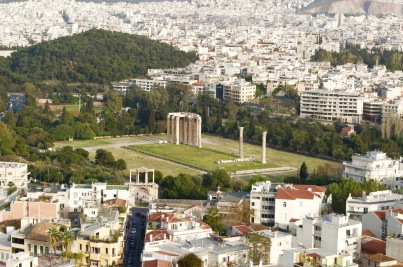 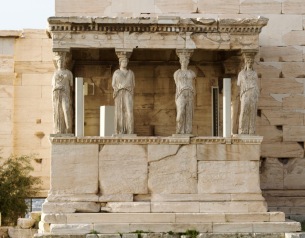 After heading back to get the stroller and return the carrier, we stopped at Areopagus Hill at the foot of the Acropolis.  It has a lot of important historical and mythological connections, and provides fantastic views.  I went up alone to take some photos, as B had been before, and hung out with Benjamin. 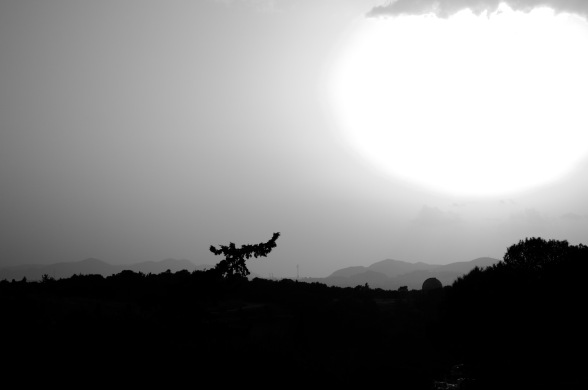 We meandered through the city centre area of Athens for a bit before calling it a night and heading back to the hotel for much-needed rest. 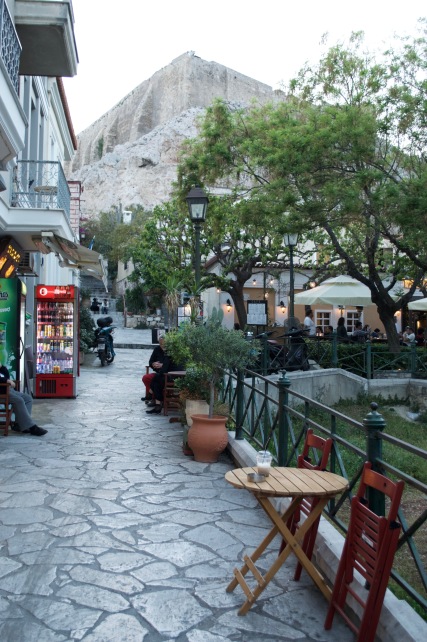 Early the following morning (Sunday), we were scheduled to take the ferry from Athens to Santorini.  We opted for the non-high-speed ferry, meaning we would be on the boat about 8 hours.  Our thinking was that it would be big enough for us to stretch out, relax, let Benjamin run around, and maybe even sneak in a nap.  While it was big and not terribly cramped, the combination of traveling, lack of sleep, and lack of adequate meals left us all pretty cranky on the ship.  I am not normally one to get motion sickness {I have been on a cruise, boats, wave runners; in cars, trains, big planes, tiny planes-even a 9-passenger plane where I sat co-pilot! and have never been sick!}.  However, I drank a cup of coffee once onboard, as I tend to get migraines if I don’t have caffeine, then promptly made my way to the bathroom and threw it all back up {sorry :X}.  The whole trip wasn’t so bad, but it wasn’t the highlight of our vacation by any stretch of the imagination.  We did get a few gorgeous pictures as we made our way through the islands in the Aegean Sea… 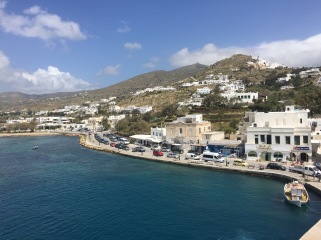 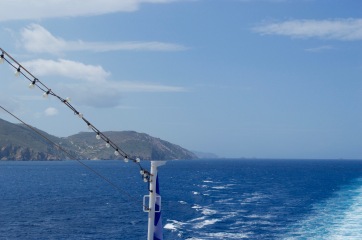 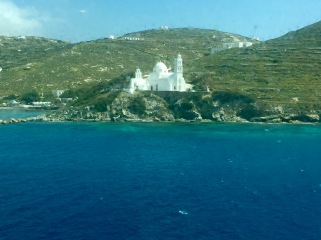 Overall, Athens was incredible, even for the short period of time we were there.  I would have loved to see more (especially the Acropolis Museum !), but hopefully we will make it back someday 🙂  The ferry left a lot to be desired, and I am beyond glad we booked a flight from Santorini back to Athens rather than a round trip ferry ticket!  However, it did take us to the breathtakingly beautiful island of Santorini, which I will write about soon!  Here is a little sneak peek of Santorini… 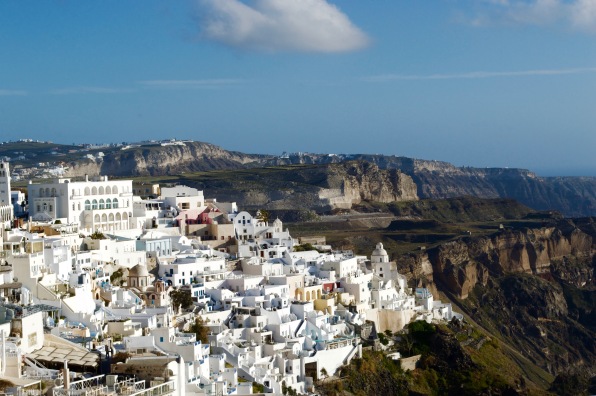