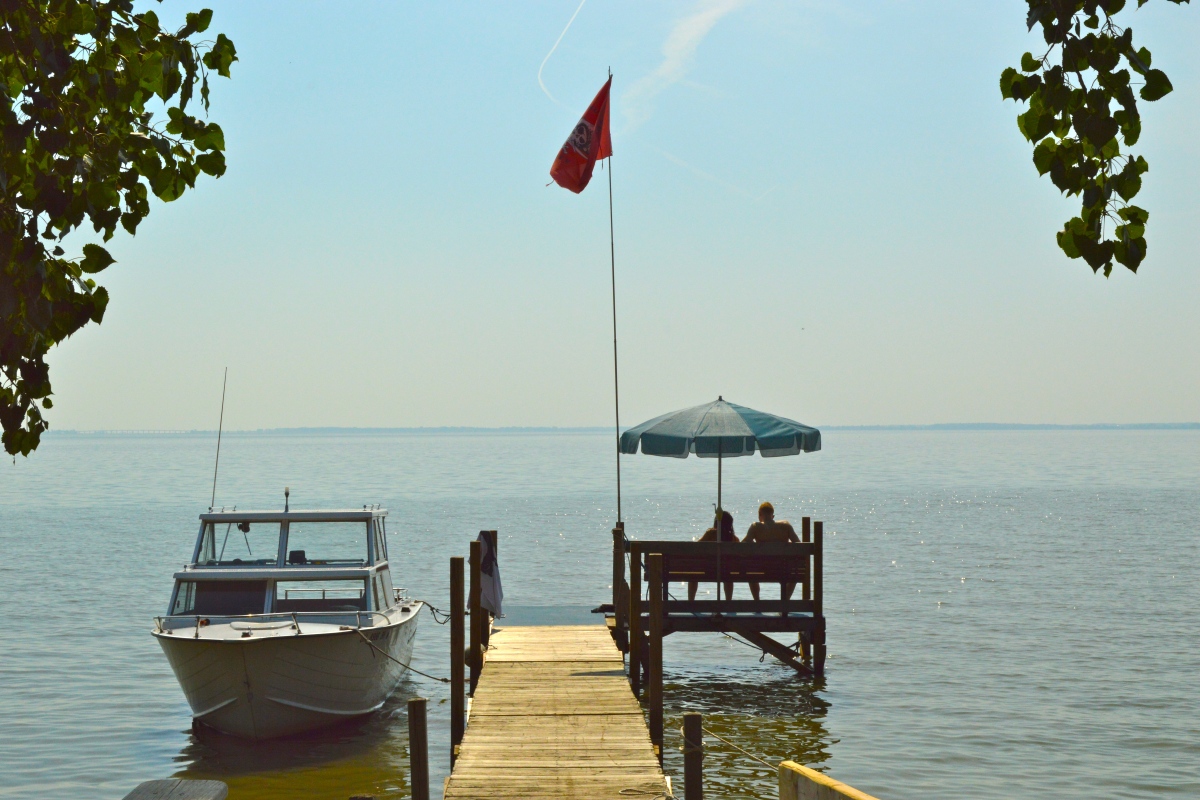 If you are following this from Facebook, I apologize because I know I have been blowing up Facebook with pictures, statuses and links lately! But since I have a few minutes, I figured I would update y’all on pregnant life and such. Right now I am in Ohio, getting ready to head back to the UK tonight (hence the bittersweet goodbye). It has been a whirlwind of a visit, but I will back up a bit to catch you up.
Let’s see, I am finished with work for the school year, which is nice, but also a bummer since I won’t get a paycheck over the summer 😦 Sucks going from teaching full time for 6 years to an hourly position! But now I can focus on getting the nursery done and spending time enjoying my pregnancy. Speaking of which, Baby Herbie is a mover, that’s for sure! This little nugget seems to be practicing karate on a daily basis. Brandon has now been able to feel the movement, which is exciting. He also talks to baby quite often, it’s adorable. We had our 20 week appointment in June, which was exciting since it was an ultrasound appointment. Little Herbie was quite wiggly during the appointment, frustrating the ultrasound tech a bit, but overall it was a good appointment. We go back Monday to review everything at our 24 week appointment. We are choosing not to find out the sex (I know, we’re crazy), and the ultrasound tech did a good job of not spilling the beans. We both still think it is a girl, and often call it her/she/Gordita/Liberty/America…those last two were added Fourth Of July weekend 🙂 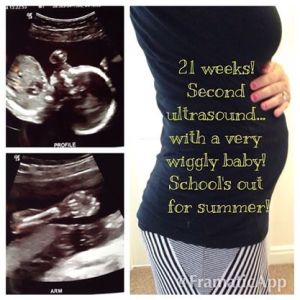 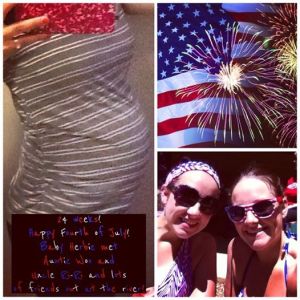 So, before I came “home” to Ohio (I will write about that in a minute), I had two job interviews for next school year. One was with the intermediate school (grades 4-5) on base for a half-time art position, and one was for a KS1 Year 1/2 teacher in a British school in a nearby town. I was really hoping for the art position, as it seemed like it would be perfect- I would only work from 11:30-3:15 each day, it would be on base, and I would be comfortable since I have taught art before. However, it looks as though I didn’t get that position 😦 I was supposed to hear something from the British school by the end of the week that I interviewed, which was a few days before I left for Ohio. I didn’t hear anything that week, so I assumed I didn’t get that position either. Much to my surprise, I received an email over a week later while I was in Ohio. The school was very impressed with my lesson (part of my interview) as well as my actual interview. They were worried though that because of my due date I would miss most of the fall term, so they offered me a two-term contract instead of a full year contract. Basically, British schools are divided into three terms (September through December, January through March, April through July), so I would start in January and work through July. So, as long as all the paperwork and such goes through smoothly once I get back, I will be teaching at a British school starting in January! I am incredibly excited and insanely nervous, as it is a regular classroom position, not to mention in a religiously-affiliated British school. I have been waiting for the chance to teach in a regular classroom though, and I think this will be such a good experience! My class will be a mixed Year 1/2 class (roughly equivalent to a mixed K/1 grade class) and I will be teaching everything from math and reading to P.E. and religion! I will hopefully start posting a classroom blog again once I am teaching! Until baby gets here, I plan on subbing on and/or off base, so I will be making some money through the fall. Wish me luck and say some prayers for me!

Ok, so now that that big news is out of the way, other big news….my Ohio trip. To preface this, I had NO plans to come “home” before the baby arrived. With my crap job and saving money for the new addition, Brandon and I had no intentions of either of us coming back to the states before the baby was born. My mom messaged me in mid-June, asking if there was a chance that I would be able to come back for a visit over the summer, as she really wanted to see me pregnant. I was in the midst of a grad class and starting to get things situated for the nursery, so my initial response was “ummm, well not really”….I explained that we couldn’t afford it as much as I would love to see everyone. Well, she and my dad offered to pay, so I conceded with some stipulations: a. I wanted to come home earlier rather than later in the summer (for several reasons, one of which, of course, being that I didn’t want to be monstrously pregnant and uncomfortable on my 8 hour flight across the pond), and b. I didn’t want to stay any longer than 2ish weeks. My mom’s response? “Can you come for the family reunion?” Mind you, by this point, the family reunion was about a week away. So I basically said whatever works for them since they were footing the bill, as long as it was after my grad class and followed my stipulations. Well, a few days later I was at Heathrow boarding my flight to the states. I left around 10am Wednesday, June 25 after several delays. Luckily, my flight was relatively empty, and I got a whole row of seats to myself. This was glorious, as stretching out and being able to lay down was amazing for my pregnant body. Also, I don’t think I have EVER peed so much on a flight, dang baby bladder. [I know, TMI, sorry I’m not sorry] So I got into Detroit like an hour late, without enough time to go through customs, recheck my bags, and go back through security before my connecting flight to Columbus. (Actually, that’s not true, but that’s a whole other story that I would title “Detroit airport sucks, but not as much as Newark airport”) Anyway, they changed my flight to a few hours later, which wasn’t a huge deal, but I was ready to be “home”. I got into Ohio around 6:30, and was beyond excited to see my mom and dad!

We grabbed a quick bite to eat then relaxed and caught up. My family is super close, but we are not phone/Facetime/Skype people, so most of our communication happens via iMessenger and email. It was nice to sit and chat face to face! The following day, we headed up to Lake Erie, where my parents have a cottage, and where the family reunion was going to be held that weekend. The weekend was AMAZING– I got to see so many family members, enjoy boat rides, eat lots of good food, and relax! I love, love, love my family ❤ They were all excited to see the bump and feel kicks and all that good stuff, so I was super happy that I was able to make it back in time for the reunion. 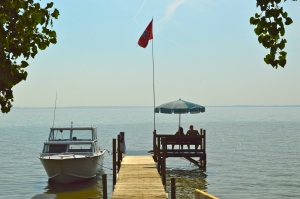 Our “slice of heaven” 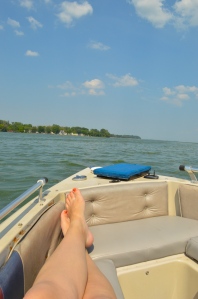 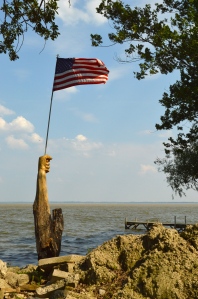 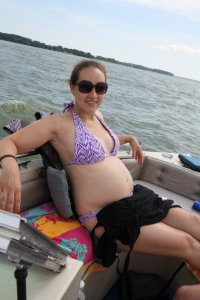 Bump on the boat!

The next week was a whirlwind of maternity clothes shopping (finally!), thrift-store raiding, and enjoying time with my mom and dad. My mom and I are thrift store ninjas and we got a ton of cute onesies and some books and such. They were also generous enough to get me some maternity clothes (love Old Navy and Target!) since I had literally bought like 3 items so far. It is exciting to wear clothes that actually FIT me now. My sister and her hubby came up to Ohio from Tennessee Thursday, which was super exciting. She is getting deployed in October 😦 so this was the last time I would see her for probably about a year. I got to spend a lot of time with her, and I am so thankful they were able to come up! Friday was July 4th, and we visited my dad’s side of the family. We also visited my cousin and his wife and their new little twins {I got some practice holding little ones :)}. They are absolutely precious and I am so happy for their little family! Finally, that evening we headed up to a family friend’s house to spend some time with them. Once again, lots of good food and catching up. 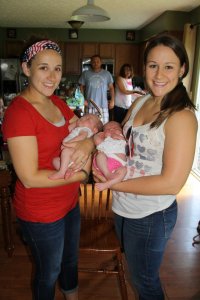 Woo & I holding the twins (practicing!) 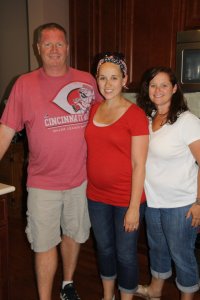 Catching up with the Burts!

We spent Saturday at the Muskinghum River, where my parents friends (the ones who visited us and went to Germany with us) have a house. This brought back TONS of memories, as our family grew up spending summer weekends there boating, swimming, tubing, camping, etc. A lot of family friends were up there, and we had a great time. Again, I am so lucky I was able to see so many people in such a short period of time! Sunday we relaxed and cooked out at the house so we could spend some family time before my sis and her hubby headed back to Tennessee Monday. 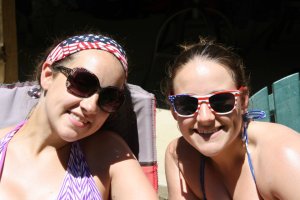 Sissy & I soaking up the sun! 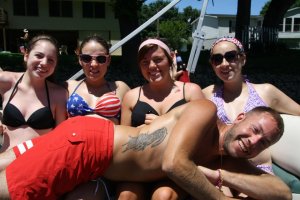 Whew, that brings us almost up to now. The last few days I have been able to catch up with a few friends and do some baby shopping 🙂 and just chill out with my parents. I am very much looking forward to heading back to the UK, even though I am sad I will be leaving here knowing I won’t see most of these people for awhile! I miss my hubby, dog, bed, and home. I can’t wait to get back and get the nursery ready and get prepared for my new job!
Ok, so I have a lot of photos to add, but it’s not letting me at the moment….I will try again soon! Until then, later gators!